Moon over the mountain

Last week’s full moon shining brilliantly from a (currently rare) cloudless sky made me think of my childhood. As a kid I grew up on a farm in western Victoria – over 20 miles (and at least that many kilometers!) from the nearest town and source of light pollution. The regular cycle of the moon was a thing you saw but perhaps, as a young kid, you didn’t fully notice or appreciate.
Over 30 years of living in major cities had made me forget the small things about the lunar cycle. Sure you catch glimpses of the moon in the city and, if you take the time, you can follow the cycle. But, in the country, with no artificial lights to obscure your observations, you notice the smaller things. The feint outline of the entire moon as the new moon starts to wax. The minute detail of the moon’s surface on a clear night. The wonder of moonlight casting shadows as you take an evening stroll. The inky blackness of a new moon.
There are other things I am starting to appreciate that I must have seen as a kid but had forgotten. The “quiet” of the early morning that is filled with the sounds of numerous birds heralding the dawn. The cacophony of cicadas and frogs in the evening. The mist wafting though the trees as it rolls up the mountain. 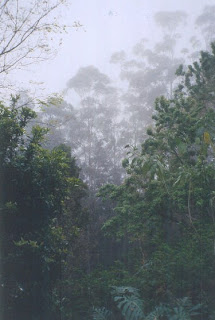 Joni Mitchell sang (in Big Yellow Taxi) “you don’t know what you’ve got 'til it’s gone”. I would say (don’t ask me to sing it) “you don’t realise you’ve lost something ‘til you get it back again”!

Here are some more details of the method used for the light earth walls.
Framing - The wall framing for the house is a double timber frame – two lots of 90mm x 90mm posts, with a gap of 70mm between, making a total thickness of 250mm. In places these are braced with a 70mm x 70mm diagonal to cater for our wind loading.There's no real need for light earth walls to be this thick, but we liked the idea of deep reveals around the windows and doors. Members of the Earth Building Association of Australia have used light earth infill in standard 70mm stud frame walls.
Filling the walls - One side of the frame is completely covered with ply, and the other with a series of narrow shutters (we used hardwood weatherboards), starting at the bottom and moving up as the earth mixture is placed in. As you move up the wall, the lower shutters can be removed.
We found that a cut-down wheelie bin was ideal for moving the light earth mix into the house, and could be lifted up using a block and tackle.
Each layer must be tamped down around the edges to ensure the corners of the framework are filled, but the whole thing does not need heavy ramming – this would only squash the straw, which has a tube-like structure which provides insulation.
The tops of the walls are tricky – not much room to manoeuvre here, so it was it was a case of shoveling it in by hand.
The process is slow, and as Christmas was approaching last year we were at 33% completion of the earth walls. We wanted some more progress before the family arrived for Christmas day, and decided to relent and hire some cheap manual labour from down the road. Toby (a real guy – not our cat of the same name) got into it. He increased it to almost 50% and allowed us to get the house almost weatherproof by Xmas.
Unfortunately our excitement at the progress was short lived. Toby was a little too enthusiastic in tamping down the straw. A month after he left us to travel overseas his walls – like the walls of Jericho – came tumbling down! Closer inspection showed he had rammed so hard there was no strength left in the straw, and the walls, now little more than clay, did not hold together. So we’re now back to not much more than 30% finished.

Drying – depending on the weather, the walls took several months to dry out. Initially they would sprout shoots from the straw seeds, but once the earth began to dry, these would die off. As the walls dry, the clay shrinks, so the fill can subside a bit, and may need some topping up. The fully dried walls are hard, with no ‘give’.
We managed to get some of our earlier, well-dried walls rendered before Christmas. We'll show the results in a later post.

The huge red cedar that dominates the grassed area next to the house is starting to get ready for winter - some of its leaves are turning yellow, and in a few weeks there will be masses of leaves raining down with every gust of wind. The tree will be bare and stark for winter, but the advantage is that that will let in lots more sunshine on the clear cold winter mornings. 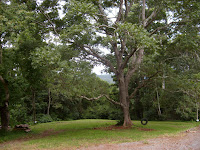 The Red Cedar is one of six native deciduous trees . We also have two of others on the property, the Illawarra Flame Tree and the Silky Oak.


Next to start losing its leaves will be the big Liquidambar near the cottage. Seeing the seasons is one of the many things we enjoy on the mountain.
In other news, our house features in the current edition of The Owner Builder magazine - very exciting! We'll be contributing a couple more articles as the light earth building continues.

For the earth building enthusiasts, here are some details of the method we used for the light earth walls.
Mixing - The light earth is a mixture of sieved clay soil, water and straw. A mechanical sieve was made from an old metal frame (picked up at the tip), some expanded aluminium grating (found at an old dam site), some 50mm mesh (from a driveway gate being thrown out) and some 6mm mesh (actually purchased from a store!). The whole thing is vibrated using a old drill and some eccentric weights. It works a treat! 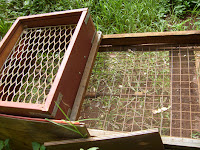 The sieved soil is put into a cement mixer with enough water to make a thin clay slurry, the consistency of cream.
This is added to straw in a large mixing tub – we scrounged an old exhaust fan canopy from a commercial kitchen, turned it upside down and sealed the holes. The mix should result in each piece of straw being coated with mud, but the whole mix should not be too wet. We had the tub on an angle, with a draining grid at the high end. We piled the mix onto this and let it drain for a few minutes before taking it in to the walls. 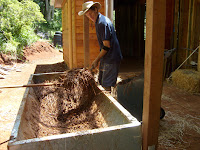 We'll continue to add further details about filling and finishing the walls in future posts.