It's been a long time between posts, but the second half of last year was spent almost exclusively on establishing the veggie garden.

We built long narrow beds from corrugated iron (recycled, of course!). Because of the slope they are shallower on one side than the other, but still deep enough for anything we're likely to grow. 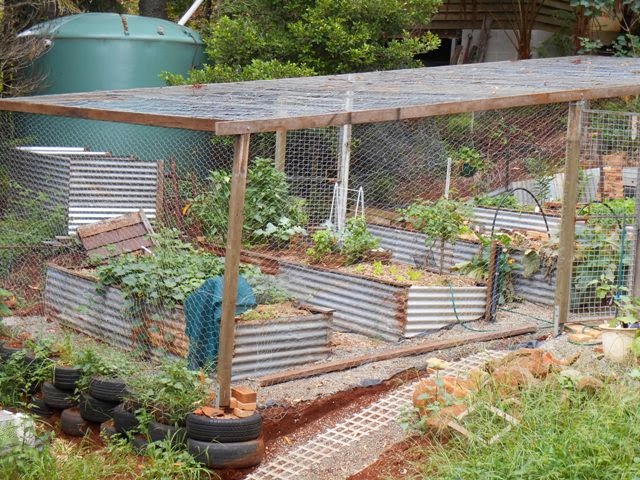 They are filled with a "lasagna" mix of layers of straw, manure, compost, lovely Mount Glorious red soil, and liberal sprinklings of Dynamic Lifter. The whole area is netted to keep out the turkeys and larger birds like bower birds, but the netting will let through  the little birds that eat insects.

So far this year we have harvested beans, broccoli, Asian greens, capsicum, garlic, lettuce, rocket, potatoes and sweet potatoes, snow peas, silverbeet, three types of tomatoes and zucchini, as well as ten or so different herbs. I've bottled loads of tomatoes for use during winter, particularly the small Black Russians, which produced enormous quantities of perfectly formed, fabulously tasty fruit.

Behind the veggies are three bays for making compost. Further down the hill are two cut-down water tanks, which hold bananas and pumpkins. Strawberries, carrots, asparagus, ginger and eggplant are now coming on. The sweet potato will probably be moved to the slope outside, where it can run wild. 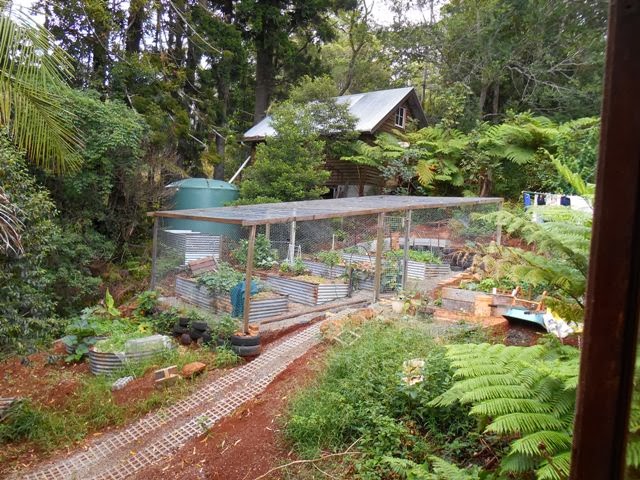 It's a constant learning experience discovering what works and what doesn't, but I never tire of the excitement of whipping up a meal that's essentially from our garden. And the bonus is I don't have to go shopping nearly as often. More time on the mountain!